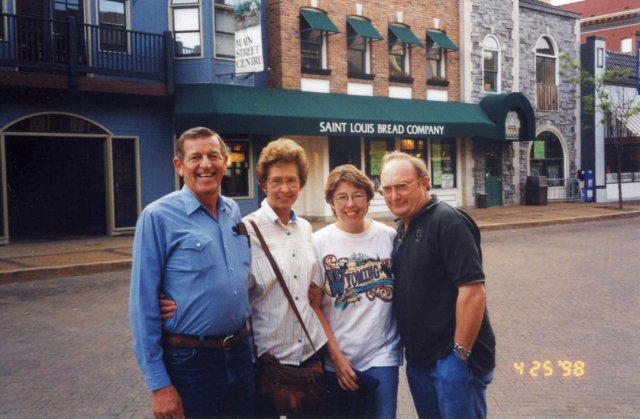 Here is a story of our first trip to the KATY TRAIL.

After breakfast of bulgar and toast, we hit the road at 7:45 a.m.  John and Mother took her new 4 wheel drive pickup and Jim and I drove my car with our bikes hooked on the back.  They ride better on my car than on the Crown Victoria of Jim’s.  Mother and John were following us but fell behind before we got to the McDonald’s that passes over the highway near Miami.  We pulled off to go to the bathroom but they didn’t see us in time to pull over.  John turned on his blinker and we assumed he was pulling off to the side of the road.  We didn’t get out but went on to meet them and they were gone.  I thought they went up the road but Jim thought they exited and went back to the McDonald’s.  We drove up the road and waited about 15 minutes to see if they caught up.  We really weren’t sure if they were ahead or behind.  A little ways up the road, we stopped for another 15 minutes and were really wondering what to do.  They had the phone number of the hotel we were staying at but we hadn’t discussed the routes we would be taking.  I finally thought of using the cell phone to call Brandon.  He hadn’t heard from anyone but I told him to give Mother Jim’s cell phone number if she called.  About 45 minutes later, the phone rang.  They were at the rest area and visitors center just over the Missouri State line.  We were about 2 minutes away.  We finally got hooked back up and proceeded on to St. Charles without any further difficulties.  I think Brandon was quite pleased to be so instrumental in getting us all back together.  He offered his relay services if we needed any further assistance.  We checked in at the Hampton in St. Charles at 5:30 p.m.  We went down to the historic section of St. Charles and had a very good dinner at the Lewis & Clark Restaurant on their balcony after finding that the St. Louis Bread Company closed early on Sunday evenings.
Monday, April 27

After a continental breakfast at the hotel, we parked our car in the casino parking lot near the Trailhead Brewery and next to the Katy Trail.  Jim had called the police dept. to see where we could park for five days without threat of being towed.   Drove to Columbia in a hard rain.  Ate lunch at the Katy Station Restaurant and the rain stopped as we were finishing up our lunch.  We left the pickup at the MKT Fitness Trail parking lot off Stadium St.  We called the police station to advise it would be left there for 5 days.  At 12:30 p.m. we hit the trail.  Beautiful tree lined this area near streams and ponds.  The threat of rain loomed ever present as we progressed on the Katy Trail.  The ride was windy in places and the packs made for some interesting maneuvering.  We passed several small towns but didn’t stop with the gray clouds ever present.  Just as we rode into Hartsburg, the rain started in. 25.08 miles of riding today.  The Globe Hotel looked a lot like the Adam’s Family abode and it was with some misgivings that we approached the front door.  Mother swore it was abandoned.  A man answered the door and explained that Jeanette would be home about 6 p.m.  His name was David and he was helping renovate the house.  He showed us to our rooms which were in very good shape upstairs.  Another couple, Frank and Sue, from Illinois are riding the trail in the opposite direction from us and are going to Sedalia and riding Amtrak back to St. Charles on Friday.  They rode from Bluffton today in two hours of rain.